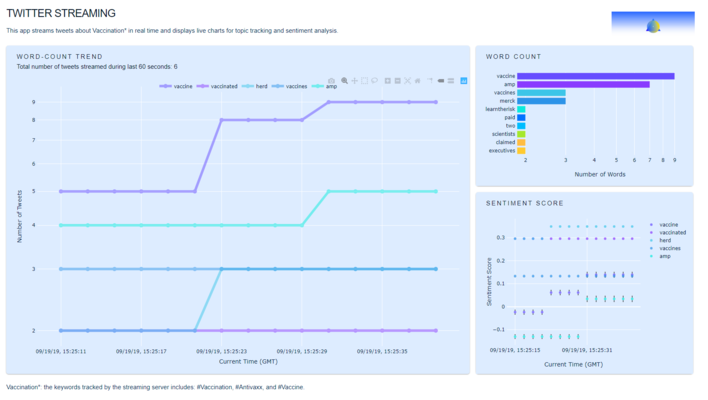 There is a lot more that can we attain from social media sentiment and data than mere likes and shares especially where health care is concerned. For the Vaccine hesitancy challenge, We believe it is important to capture the views and trends of the public, social media sites like twitter provide a good window into this area.

The app itself can be accessed through this link .

The app collects all the tweets related to vaccination posted and visualizes some statistics. The first panel on the left-hand side is a line plot of the word-count trend, showing the changing pattern of the top-5 most frequently mentioned words. The top panel on the right-hand side is a bar chart showing the top-10 words for better comparison. The figure below is a time-shifting scatter plot of the averaged real-time sentiment score for all the tweets grouped by the top-5 mentioned words.

The predefined tracking keywords are;

Social media today has become a very popular communication tool among Internet users. Millions of messages are appearing daily in popular websites that provide services for microblogging such as Twitter, Tumblr, Facebook.

Authors of those messages write about their life, share opinions on variety of topics and discuss current issues. Because of a free format of messages and an easy accessibility of these platforms, Internet users tend to shift from traditional communication tools (such as traditional blogs or mailing lists) to these services. As more and more users post about products and services they use, or express their political and religious views, microblogging web-sites become valuable sources of people’s opinions and sentiments. Such data can be efficiently used

for marketing or social studies.(Pak, Alexander, and Patrick Paroubek. "Twitter as a Corpus for Sentiment Analysis and Opinion Mining." LREc. Vol. 10. 2010.)

Vaccine hesitancy is not new, but today – as the use of social media continues to increase – opportunities to spread misinformation and pseudoscience are unprecedented. Facebook, Twitter and other networks are taking steps to limit anti-vax content – but is it enough? And is there a role to harness social media for the powers of good?

Twitter is a platform that embraces a large amount of information flow per second, which should be fully utilized if one wants to explore the real-time interaction between communities and real-life events. This is the basis of developing a tool that is capable of collecting, storing, analyzing, and finally, visualizing Twitter data to glean real time information on Vaccination.

The code and datasets for this project are openly available and we are eager for collaborators. Please use the projects github repo or JOGL project page.

Use the issue tracker in github to start the discussion.

Another team or individual may already working on your idea, your approach is not quite right, or that what your wish to work on exists already. The ticket you file in the issue tracker will be used to sort that all out.

Be sure to add the relevant tests before making the pull request. Docs will be updated automatically when we merge to master, but you should also build the docs yourself and make sure they're readable.

Once you have made all your changes, tests, and updated the documentation, make a pull request to move everything back into the main branch of the repository. Be sure to reference the original issue in the pull request. Expect some back-and-forth with regards to style and compliance of these rules.

The fatal impact of vaccine hesitancy

In 2018, there were over 82,000 cases of measles confirmed in the EU – three times more than in 2017 – and measles led to 72 deaths. Cases of measles are affecting all unvaccinated groups, adults and children alike, with large numbers of cases and fatalities in countries which had previously eliminated the disease.

Vaccine hesitancy is a key reason for this worrying trend. Europe is the most vaccine-hesitant region in the world, and we are now witnessing the results. Last year’s wide-ranging survey of vaccine confidence in Europe, led by Heidi Larson and her colleagues from the Vaccine Confidence Project, found that the picture in the EU is complex with varying levels of vaccine confidence between countries.

The role of social media

At the core of social media is the ability for us to share ideas and content with our peers. While this freedom of information is what makes social media so appealing, it is also what can make it dangerous. Social media is not the cause of vaccine hesitancy, but it has certainly played a role in making anti-vaccination arguments and pseudoscience accessible to a wider audience.

For the live streaming app, the traditional workflow is divided into two independent pipelines working together (Figure 1). In detail, data processing starts right after the first line of record is received, followed by data analyzing and results-visualization, etc. While the visualization server (Plotly Dash) is handling data-processing, the streaming server (Tweepy), on the other hand, will bring in the next line of newly generated data. Each pipeline keeps looping at its own pace.

Figure 1 shows the underlying framework of all the processes described:

As shown above, to make the application react promptly, we break the traditional data science pipeline into two modules that are taken care of by their corresponding local servers. Specifically, Tweepy is responsible for streaming data, i.e., control the flow of tweets, and we add extra functionalities to the trigger behavior, such as pushing data into a database or deleting old records from the database (optional). Note that the extra functionalities are triggered whenever there is a tweet falls under the predefined tracking conditions thus heard by the server. Therefore, for the Tweepy server, the intervals between the last operation and the next are random, as shown in the figure.

Meanwhile, data processing and visualization are carried out by another platform, Dash by Plotly. Dash controls the rendering and refreshing of the visualization on the browser; hence, a constant time interval for this trigger is preferred. Depends on the data throughput, the time window can be ranging from 0.5 seconds to 5 seconds ( 2 seconds for this app).

In the big picture, two running servers are executing their loops independently, and data is flowing in between them in the predefined time interval to update the application’s graphical interface.

VADER (Valence Aware Dictionary and sEntiment Reasoner) is a lexicon and rule-based sentiment analysis tool that is specifically attuned to sentiments expressed in social media. VADER uses a combination of both.

A sentiment lexicon is a list of lexical features (e.g., words) which are generally labelled according to their semantic orientation as either positive or negative.

VADER has been found to be quite successful when dealing with social media texts, NY Times editorials, movie reviews, and product reviews. This is because VADER not only tells about the Positivity and Negativity score but also tells us about how positive or negative a sentiment is.

It is fully open-sourced under the MIT License. The developers of VADER have used Amazon’s Mechanical Turk to get most of their ratings, You can find complete details on their Github Page.

VADER has a lot of advantages over traditional methods of Sentiment Analysis, including:

The source of this article is a very easy to read paper published by the creators of VADER library.You can read the paper here.

We collected all tweets containing at the search string: vaccination. Along with the tweet text, we downloaded the date and time when the tweet was published, and the location of the user (if provided). We also downloaded the user id, follower ids, and friends ids. The followers of a user A are those users who will receive messages from user A. The friends of a user A are those users from whom user A receives messages. Thus, information flows from a user to his followers. We collected tweets using the open source information tool, TWINT.(https://github.com/twintproject) and a python algorithm.

In contrast to the open Twitter Search API, which only allows one to query tweets posted within the last seven days, Twint makes it possible to collect a much larger sample of Twitter posts, ranging several years. We queried Twint for different key terms that relate to the topic of vaccination ranging from the year 2006 to 30th of November 2019 and stored in an aggregated CSV file.

The aggregated dataset was cleaned and preprocessed for Natural Language processing using python 3 scripts. The process is described fully in the hosted Jupyter notebooks within the github repo.

2.3: Creation of an online Platform:

The Dataset will be used for further analysis in the future stages of this project Including:

To our knowledge there is no active program that is currently actively carrying out qualitative analysis on Twitter data for sentiment associated with Vaccination. However a number of studies have been carried out to analyse twitter for social media trends on Vaccination.

Our project stands out by creating dashboard for real time analysis and creation of datasets that can be used to asses historical trends.

Our project is subdivided into four distinct phases

1.In the scoping phase; we identified the project need as; 'we needed a way to carry out a quantitative analysis of social media sentiment on Vaccination'. We identified twitter as target for data gathering and analysis. [ Two Weeks]

2.We reviewed both academic and existing code and came up with a relevant strategy for data collection with a tentative plan for analysis and exploration.[Two Weeks]

We are currently in the development phase.

Health research institutes, governments and not for profit organizations are only a few of the stakeholders concerned with the rising impact of social media trends on public health.

We aim to partner with researchers from these organisations to make the tools we create available to them for aggregation with epidemiological data.

The project is currently run by a volunteer.

Different team members are actively being sought for recruitment to support the running of the project.

All the datasets and code from the project will be made openly available on JOGL, and GITHUB.

A web app with an interactive dashboard for real time analysis of vaccination sentiment on twitter is deployed here.

An open platform for historical analysis of twitter data on vaccination will be developed. The final version will be publicly available by January 2020.

Research papers based on the analysis of the datasets collected will be shared with the public and peers through relevant channels.

This project has not received any external funding..

This work is licensed under the Creative Commons Attribution-NonCommercial-NoDerivatives 4.0 International License. To view a copy of this license, visit http://creativecommons.org/licenses/by-nc-nd/4.0/ or send a letter to Creative Commons, PO Box 1866, Mountain View, CA 94042, USA.