One of the main problems with TB is the fact that the Antigen presentation is not efficient. One of the main problems is that the Mycobacterium arrests the phagocyte and the fusion of the bacterium in the phagocyte with the lysosomes and have downstream effects. We propose a methodology to evade this mechanism and induce acceleration of lysosomal bio-genesis by activating TFEB using a series of different promoters that are activated in response to a set of Mtb secretory proteins.

Vaccines traditionally work based on antigen-antibody interaction. The process involves the body’s cell recognising an foreign cell, engulfing it and further presenting certain part of it to cells that can kill it. Mycobacterium has evolved to evade these mechanisms. We propose a CRISPR based strategy to fix this.

The conceptual framework of our project is defined and well stated in this document. We need to move forward with the evaluation of constructs by using any conformational assay(Luciferase assay). We have designed constructs based on existing literature. However, they are yet to be evaluated experimentally. Once the evaluation is done and it’s proven that the system is activated in response to Mycobacterium tuberculosis(Mtb) infection. Next step will be: we need to understand the kinetics of the reaction as well as to what extent our construct helps with antigen presentation and mycobacterium clearance. This will be confirmed by doing ex-vivo culture of lung cell lines for histological and bacteriological analyses. In combination, we will use alveolar organoid to perform real-time analysis of our proposed action. After successful ex-vivo experiment we will perform clinical trials also including humans. This will lead to the development of our kit and eventually distribution of kit to end user

One of the major issues with tuberculosis is that the microbe has been coevolving with humans ad has developed strategies to evade the immune system. The microbe resides in the phagosome of the macrophage, however, the innate mechanism by which the phagosome lysosome fusion happens is suppressed ad the mycobacterium keeps on dividing within the cell until a certain threshold no. of bacteria is formed which is followed by cell death. Unfortunately, even after cell death when the next macrophage ingests the mycobacterium the same process is followed and through this process the bacterium manages to evade the immune system as no/very few antigens are processed to have a potent immune response. Hence even having been vaccinated might not be enough for a human to be able to save from the disease and the only approved vaccine available is BCG which is also not considered to be efficient.

It has been previously proven that activating autophagy enhances mycobacterium clearance from the cell and enhances antigen presentation. So, the question we want to address is can synthetic biology-based interventions be used to activate autophagy innately in these macrophages in response to foreign proteins to improve antigen presentation? 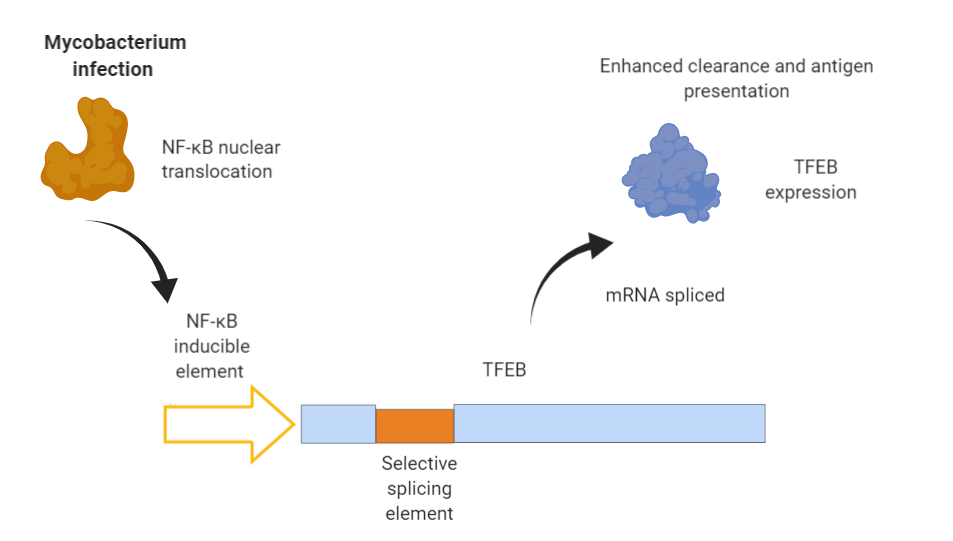 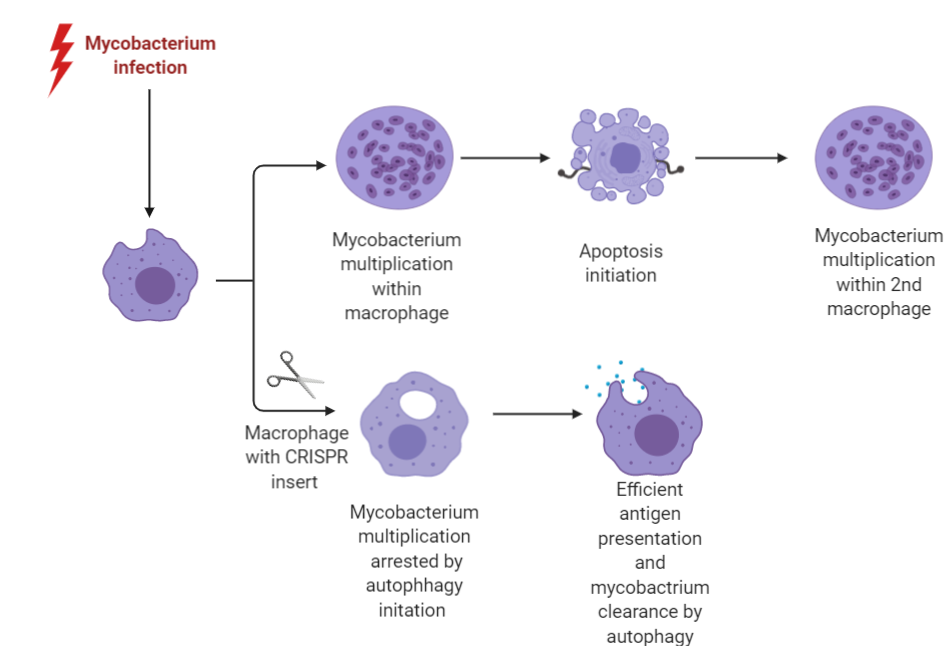 We will analyse the splicing site of RAB8B (gene responsible for phagosome activity). These splicing sites can be multiple in number also. Design multiple construct with most to least recurring splicing sites and test them invivo. We will progress with most successful one further in our methodology. In order to design the constructs with splicing element and TFEB we will use in silico approach. After in silico designing we will order and test these constructs first in E.coli (by providing external inducer to the bacterial). Afterwards, on lung cell lines and in parallel, also track this on alveolar organoids. These successful trials will take us to the next step of trial on model organisms including humans. This success will be a milestone for our project directly leading to development and distribution of kit.

Antigen-antibody interaction is one of the major medical issues. Sometimes the issue is utterly challenging for our immune system and somehow leads to failure of our immune system. The intensity of this problem is so high that it affects the existing treatments, diagnosis and vaccine therapy. There are hardly any ways exist to increase the antibody and antigen interaction and also the performance of these systems is questionable. Synthetic biology is acting as an aid and bringing novel ideas to challenge such complex problems. One of the major advancements of synthetic biology is CRISPR. Hence, we are using CRISPR as a tool to address this issue via Gene therapy by adding an extra copy of the gene (insertion of the gene rather than deletion). This tool provides us with extremely beautiful design and accuracy. CRISPR combined with alveolar organoids for visualising the treatment stages is the novelty of the project.

Based on the feasibility and considering a place to work, we are proposing the following timeline for the project. This timeline is based on proposition of the objectives. 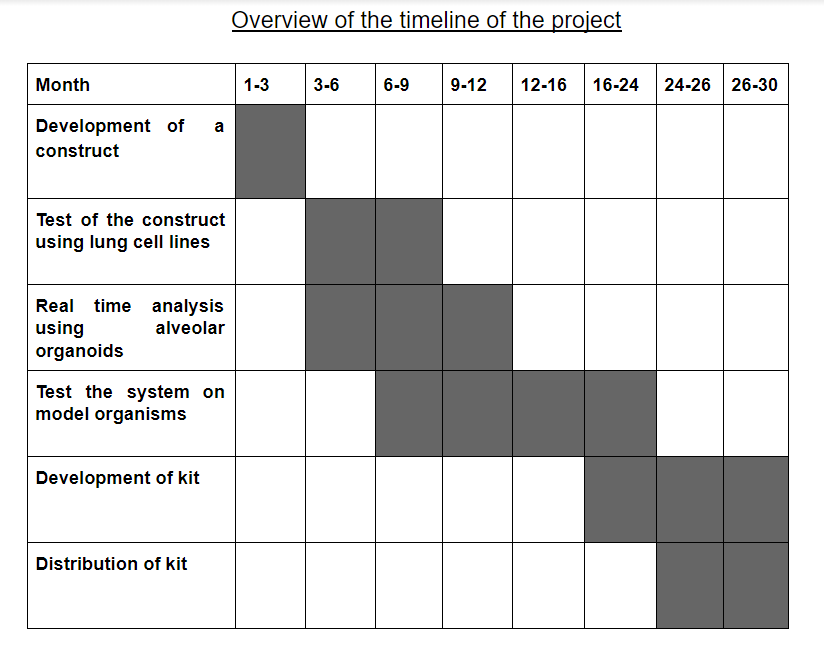 For successful implementation of the project we would require following resources including IT and data analysis support, laboratory environment, laboratory equipment, partnership with animal facilities and clinics (for model organism and human testing) and media support.

The stakeholders involved would be the Government, Medical staff, Pharmaceutical & Vaccine industry, media and lastly common people. Our intervention is expected to improve the efficiency of TB vaccines in general by providing the antibodies better access to antigens thereby lowering the disease possibility in case of an infection. This also contributes to increasing the lifespan of drugs to which the bacteria develop resistance. It would also provide incentives for pharmaceutical companies to invest in antibiotic research for infectious diseases. The government and international organisations support are expected to be able to design programs to have this intervention done alongside the country’s existing Vaccination programs. The most important stakeholders to be considered is the common man. Methods need to be designed in such a way that people make informed decisions and understand the implications of why they need to take vaccines and how our product helps them.

Following our experimental setup, we plan to test our system with human subjects. Once done we would need to implement our system among a specific population and assess the infection rate of the population and how efficiently our method has worked. Vaccines are also supposed to be one of the major players in helping us tackle antibiotic resistance. TB is one such disease for which AMR is something that has been a problem. Our project can also be evaluated for helping increase the lifespan of antibiotics. Also, this would provide new ventures for us to look into biological mechanisms that can be altered to make our cells more efficient

There is ambiguity over whether CRISPR-mediated genome-editing technology is characterized as a medical product or procedure. This means it’s unclear whether pre-market approval is required or whether, like surgical procedures, early assessment should be governed by domestic professional societies and institutional funding. Although, CRISPR brings a new horizon of medical sciences and new advancements into diagnosis and therapeutic methodology. As mentioned before the market of CRISPR is questionable with lots of ethical concerns also. We are going to follow bioethics report made by US National Academies and a preliminary report by the UK Nuffield Council. These reports contain all regulatory processes in the context of CRISPR mediated somatic cell therapy. The assessment protocols will be followed strictly during all clinical trials and lab experiments. Risk assessment will be studied and quantified before performing any kind of experiments related to living organisms and CRISPR. Appropriate measures will be taken and expert advice will be considered in case of complex situation. Financial cost of the end product is always challenging nevertheless we will make sure that the end product would be affordable and sustainable for end user.

The proposed design is quite sustainable, as the gene insertion with a somatic attribute is inheritable. This mechanism used by us could be easily scalable to other infectious diseases where antigen presentation is always a challenge. This approach can be scaled to other infections by changing the inducer (extracellular toxin of the infectious pathogen). This approach may be useful in a constructive way also. This approach will help us in tackling Antimicrobial resistance as we would have relatively fewer people having infections and hence rare antibiotics would be consumed leading to a longer lifespan of the antibiotic.

Tuberculosis is among the major concern for developing countries. With proper prevention, treatment and early detection one can better tackle the disease. We are planning to develop a brochure to aware the population about the disease, new treatment methodology and distribute them using local stakeholders (NGOs, newspapers, social media), by organising seminars and camps. We will distribute the kit and provide proper training to doctors and nurses about the delivery method. In India, The anganwadis care centres played a major role in the eradication of polio from the country. We are planning to use a similar approach to communication and dissemination.

The proposal is prepared based on motivation for research and contribute to global health concern. The team is looking for funding and more excited to make this proposal a success. The possible funders: Merck Open Foundation, EIT Health, Sanofi, Pfizer. We are open to any kind of support and collaboration.